Home » Gadget Reviews » The New and the most Beautiful MacBook Pro with Retina Display from Apple! 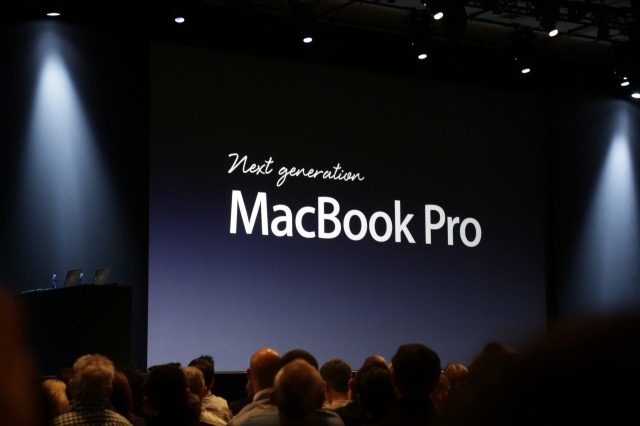 MacBook Pro, one of the premium products of the prestigious technology company, Apple, has now evolved into its next model, which boasts about the amazing retina display, a technology that would definitely please many Apple fans. Apple’s Phill Schiller called the new Apple MacBook Pro as the next generation MacBook Pro while unveiling the new product at the World Wide Developer’s conference (WWDC). For your information, World Wide Developer’s Conference is for the developers of the Apple products specially hosted by the company every year.

The new MacBook Pro looks incredibly thinner when compared with the previous year edition, 2011 MacBook Pro. In fact, as Phill Schiller stated, the device is thinner than a human’s finger. The ultra light weight factor too is not missing in this device. The device just weighs around 4 lbs. In addition to this, it can store a large amount of data with the help of the 768 Giga Bytes of flash storage. Plus, there is an NVidia Kepler GPU to support high end graphics for the game buffs. However, you cannot find an optical drive in this notebook, which may disappoint a few Mac lovers. The highlight of the new MacBook Pro specs is the technology of retina display. Retina Display, for a common man, is an outstanding innovation that allows the device manufacturers to build the display screen of the devices in such a way that the pixels are not visible to the human eye, even when viewed from a distance. Do not forget the fact that, this is the first time a notebook features a display screen with the retina display technology. This technology is possible in MacBook Pro, since its screen resolution is quite high with the figures of 2880 x 1800. The physical measure of the screen size is 15.4 inches with a total count of 5,184,000 pixels, the most in any notebook on earth. Moreover, when compared with the previous edition, the display screen of the new one will avoid the reflection and glare by 75 percentage. In MacBook Pro, there is the quad core Intel i7 chip, which, by any measure, is the fastest commercial computer processor. Usually, such a high processor configured device will not have a great battery life. However, Apple promises that the users will not have to use the MacBook Pro charger too much, as the next generation MacBook Pro battery life will not disappoint them at any cost. According to Phill Schiller, the battery of the device will serve for seven solid hours, and in standby mode, up to 30 days! Usually Apple products are very expensive and there is no exception this time too. The basic model of the next generation MacBook Pro price stands at $2199, with the options like 2.3 GHz processor, GeForce GT and 8 GB RAM. However, the highest configured model’s price is a whopping $3749. Forget the price, and the next generation MacBook Pro, without any room for doubts, would definitely fascinate the users in all aspects, as Phill Schiller claims it is the most beautiful computer Apple has ever made!