In the recent past, a lot of rumors had surfaced about the Grand Theft Auto 6 being set in a decade gone by in the past. Many fans, who have been discussing the game on different rumors, speculated that it would be set in the ‘80s. As soon as some of the most avid gamers started vouching for this, most people started believing in this rumor. But, now a reliable source has claimed all the theories about the game being set in the ‘80s are untrue.

The person who is being referred to as the ‘reliable source’ here is Tom Henderson. Tom happens to be a game junkie and keeps a close tab on the developments taking place in this space. In the past, Tom had leaked information about Battlefield and Call of Duty which went on to be true. Recently, Henderson took to Twitter and posted this: “It’s not set in the 1980s and is modern.” 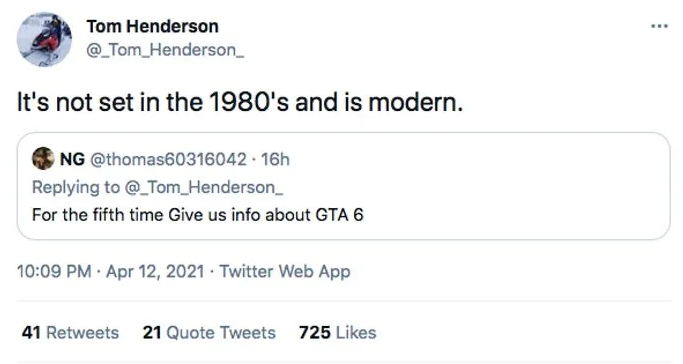 While Henderson didn’t tweet anything after this or offer any further clarification, his simple statement carried a lot of weight. The reason behind this is that he has been very accurate about his predictions. Fans don’t see any reason to believe that the piece of information shared by him would be inaccurate either.

A lot of Twitter users replied to his tweet. One user, in particular, stated that the next game in the GTA series would definitely be the kind of game one must look forward to. To this, Henderson replied: “GTA Online + Modern + Wacky S*** = More Money.”

Rockstar Games has earned a lot of revenue through GTA Online, so it is unlikely that the company’s focus would waver off in the near future. Strauss Zelnic, CEO of Take-Two Interactive, stated in an interview given a while ago that 2020 proved to be one of the most successful years for the company and one of the most important factors behind it has been GTA Online’s popularity. He seemed to be very ecstatic about the fact that ever since its release in 2013, 2020 proved to be the year when GTA Online earned the maximum revenue for the company.

Also Read: Elder Scrolls VI: About The Much Anticipated Next Game

As stated earlier, Henderson is quite a credible source but unless Rockstar Games gives out an official confirmation, one can’t really be completely sure. The only news about Grand Theft Auto 6, which has been confirmed by official sources, so far has been about the team making regular updates to the game till its release, so that it’s presented in its most polished form possible.